Earlier this year I bought my first rifle. I mounted a scope on it and a very kind friend took me to Bisley for the morning to help me zero it. With a lot of patient supervision and some gentle intervention it was zeroed.

However, no matter how hard I tried, I couldn’t hit the same area of the target twice. I couldn’t get comfortable holding the rifle. It just didn’t feel right. The recoil was unpleasant too. I returned to Bisley a few weeks later and had the same problems. I was convinced that I wasn’t holding the rifle correctly. I spoke to friends and sought guidance from acquaintances. All gave helpful but differing advice. Use a sling and wrap it round your arm. Use a bipod. Use a sandbag. Try prone. Hold it this way. Hold it that way. Move in closer. I ended up incredibly confused. Then suddenly, I had a moment of clarity. How did I learn to speak French? How did I learn to drive? I had lessons. So why not find someone who could teach me how to fire a rifle?

Talking to various people and with careful research on the Internet, it became clear that rifle shooting instructors are incredibly rare, and more so when compared to, say, driving instructors or French teachers. I wanted someone who made their living from tuition, not someone who did a bit of tuition on the side. One instructor’s name kept coming up in my research – Paul Hill at Corinium Rifle Range. He runs a 100m range near Cirencester.

So, a date was set. My estimate of driving time was woefully poor and, embarrassingly, I arrived at the range 15 minutes late. Paul introduced himself and had a chat. Paul then looked at the rifle. He rested the rifle on a bag on the bench and asked me to take a couple of shots at a metal fox. He immediately diagnosed two problems: (1) the scope was too far forward and (2) my head and eye were too low relative to the scope. He remounted the scope for me. He also explained that most rifles are designed for iron sights where the eye looks along the top of the barrel. To facilitate this, the comb is fairly low. Adding a scope means that the eye needs to be raised higher so he applied a temporary comb raiser to the stock, and suggested that I invest in one of Rob Hunter’s sniper cheek pieces as this would raise the comb and get my eye in the right place.

The raised comb (albeit temporary) and the remounted scope made a huge difference to comfort. No longer was I craning my neck. Paul showed me how to hold the rifle. So, under his close supervision, I aimed at the target and squeezed the trigger. With the new method of holding the rifle, there was practically no recoil. I hit the target but a little bit off the centre. Paul made some adjustments to the scope. I fired again. This time I was closer to the centre. Paul adjusted the scope again. I fired a third time. Now I had moved away from the centre. We did this again but there was no consistency.

More practice shooting followed, with Paul continually making adjustments to my mount. He showed me how to squeeze the trigger rather than snatch at it, and where to put my finger. My stance was adjusted. I was now consistently within an inch and a half or so of the centre of the target. We changed ammunition and, suddenly, the grouping improved. I could now place three bullets within a one inch circle. Wow! I chuffed with this. And the rifle was now starting to feel comfortable. Paul moved me on to a two inch hole  in the “engine room” of a steel deer target. This was a bit trickier, but Paul explained that aiming at something is easier than aiming at nothing. Paul then had me shoot a one inch gong. I could consistently hit this. Again, Wow! Again, I was chuffed to bits with this. 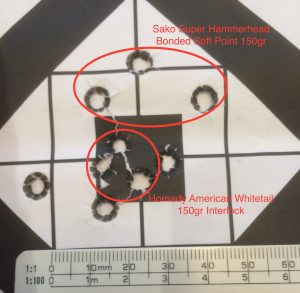 We finished the lesson with some advice on cleaning, and Paul set me some homework – I need to practice mounting and practice dry firing.

All in all, an excellent session with Paul. He’s a very good teacher and communicates well. He understands what he is doing and is able to explain concepts in terms that were simple enough for me to understand. I got the rifle set up correctly, corrected many faults and learnt a lot. And as for the shooting – I’m chuffed to bits with that!