The story begins in summer 2014. At that time I was a member of a small driven pheasant shoot. There was a struggle to grow sufficient cover crops to hold a season’s worth of birds as they were being eaten by fallow. The shoot then secured the stalking rights from the landowner.  Throughout the winter of 2014/2015 I accompanied the keeper on a number of trips to his high seats. There were fallow all around but I never saw the keeper fire a shot.

A friend who stalks politely suggested I should do the DSC1. He said that not only would I learn about deer ecology but I’d also learn best practice for safety. Upon his recommendation I signed up with Jelen Deer Services. I hadn’t shot a full bore rifle for nearly 30 years so my wife promptly sent me for some training at Holland & Holland.

Mike Allison and his team at Jelen, supported by an excellent on line training system, delivered the course to a very high standard. The shooting test was nerve wracking but ended up easier than expected. I struggled with shooting prone as I find it difficult to lie down. The examiner was excellent and gave me some extra time to get myself into position. I’m delighted to say that I passed first time.

I received the results for the DSC1 and immediately completed the paperwork for my FAC. I submitted this to the police in April 2015 but got caught up in the backlog that Thames Valley Police were experiencing at that time. The inspection and interview took place in November 2015. In the meantime, I booked myself onto the Mentoring Scheme in Swinley Forest, Windsor operated by the British Deer Society. This gave me two guided stalks with an experienced stalker and satisfied the “reason to shoot” requirement for an FAC as by this time I had left the shoot.

I did the first stalk on a cold and dry afternoon in December 2015 with BDS stalker. He had already sent me a kit list and some very clear directions. We met and then the stalker set up a simple black deer target at 100 yards as he wanted to make sure that I could put I bullet in a 4 inch circle. This I did successfully. We saw a roe doe run in front of us. He then took me round his ground as we tried to see some deer. He was continually showing me things to look out for such as slots and grazing. We finished off the day on a high seat but unfortunately saw no more deer.

The second stalk under the BDS scheme took place very early on a Monday morning in April. The weather was mild and dry. I met the stalker and he drove me onto the ground. We immediately saw a roe buck and he told me to take a shot at it. I was slow getting the rifle up onto my quad sticks and the buck walked off. The stalker showed me where the buck had gone and we walked very, very quietly along a track. The buck stopped. The stalker suggested that I took another shot but again I was too slow lifting the rifle up and again the buck walked off. We followed the buck again. I struggled to see it but the stalker showed me where it was.  I got the rifle up on the sticks, found the buck in the scope and then tried to remember what I’d learnt on the DSC1 about shot positioning. I got what I thought was the engine room in the sights, squeezed the trigger and the buck fell. The stalker said that he had watched the bullet connect and was confident that it was a clean kill. I had shot my first deer. We waited, and then walked over to the buck. It was a young buck, with pedicles still in velvet. I touched its eye with my stick and there was no response. 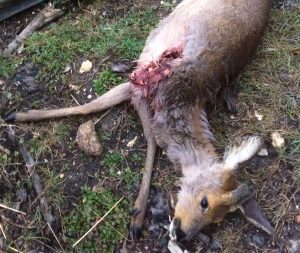 We carried the buck to the vehicle and then went in search of more deer. We saw roe and muntjac but we weren’t able to get close enough for a safe shot.

The stalker then took me off to the estate game larder, and showed me how to gralloch the deer and make various health checks.  I was chuffed to bits when I saw that I had placed the bullet straight through the heart.

All in all, the BDS Mentoring Scheme proved to be excellent and I am very grateful that schemes like this are available for complete beginners like me. The stalker was an excellent teacher. He was knowledgeable and patient with my many questions. In the space of those two very enjoyable stalks I learnt an incredible amount and I’m happy to recommend it to anyone new to stalking. There is no substitute to learning from someone with experience.

Readers may at this point be wondering what happened with the FAC – this eventually arrived in March 2016 but there was no time to source a rifle, zero it and practice before the April stalk so I used the stalker’s rifle for both BDS stalks.